How The Irish Saved Civilization by Thomas Cahill

Monastery of Clonmacnoise (Cluain Mhic Nois)
meaning Meadow of the Sons of Nos
Founded by Ciaran of Clonmacnoise in 545 A.D.
Located in the central part of today's
Republic of Ireland
South of Athlone on the River Shannon
in County Offaly
High Kings of Tara and Connacht were buried here.
Became Important center of learning during its time 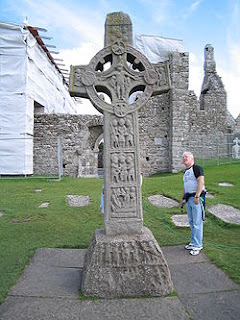 Cross of the Scripture, Clonmacnoise
Thomas Cahill asserts  in How the Irish Saved Civilization that the Irish Christian monks, by sequestering and copying a vast and wide-ranging collection of written works, preseved what became the basis of Western Civiliztion as we know it today.  Without these manuscripts from our Greco-Roman and Judeo-Christian heritage, Cahill claims, we would not have experienced the immeasurably strong influence of Aristotle and Plato, Augustine of Hippo and Constantine, Abraham and Moses, Paul and the disciples, and even Jesus in the development of our culture.
Cahill discusses the time between the fall of Rome and the rise of Medeival Europe with flair, flamboyance, and humor.  As the barbarians tribes invaded and conquered the Roman Empire in the early 5th century, they, unfortunately, also also succeeded in destroying many books with which we could have understood our past even better.  Many manuscripts were saved, however, and were hidden in safe places.  The cloisters of the monestaries in Ireland served as these havens, because Ireland was so remote from the continent.  Rome had even thought it not worth the trouble to travel to the northern island to add it to the Roman Empire.

I would highly recommend this book and others by Thomas Cahill.  His views can be controversial, but his ideas are so thought provoking, his descriptions so vivid, and his storytelling so riveting, anyone, not just history buffs, would thoroughly enjoy and deeply ponder all of these aspects.

The audio recording narrated by Donal Donnelly is also an absolute must to experience.  He makes Cahill's already lively words come alive even more.  With Donnelly's exquisit accent and boundless expressiveness, a listener is convinced she is hearing a Shakespeare play rather than listening to boring old history.  Even laughing out loud is not an uncommon happening while absorbing this recording.

Posted by Carol Fleserieu-Miller at Tuesday, May 11, 2010