The Rock of Cashel is the plateau of rock under these medieval ruins,
also known as St. Patrick's Rock
Located in southeast Ireland, Cashel, County Tipperary 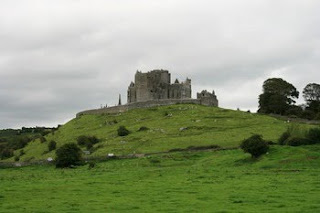 Cashel Rock again, Cashel is the anglicized version of an
Irish word meaning "fortress" or "stone fort" which explains why
this plateau of rock is also known as Cashel of the Kings. 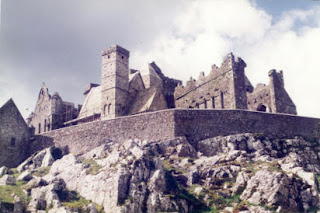 Rock of Cashel,  Legend says at this site in 432 A.D., St. Patrick
baptised King Aengus, a King of Munster who became
Ireland's first Christian ruler
During the baptism, legend also has it that St. Patrick used the 3 leafed
shamrock (clover) for the first time to explain the
Christian concept of the Trinity.
Also, it is said that during the baptism, the devil flew over Ireland and

ran into the Slieve Bloom Mountains.
Then,Satan took an enormous bite
out of the stonypeaks and spat out his massive mouthful and formed
the Rock of Cashel. 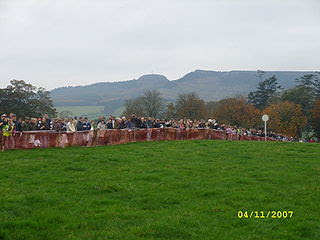 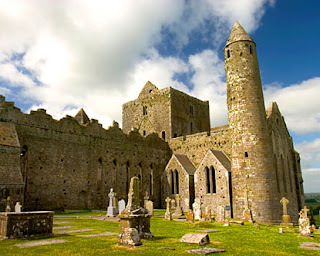 The first structure to be built on the Rock of Cashel was
the Tower.  It is 90 feet tall and built after a
King of Munster gave the rock plateau to the church in 1101 A. D. 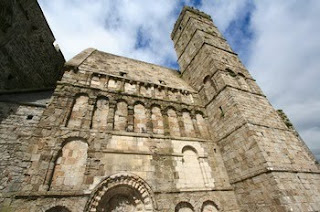 The second building, Cormac's chapel,
a unique Romanesque church, was finished in 1134
for King Cormac III 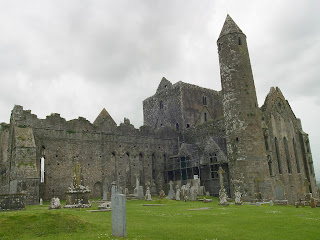