Lament For A Maker by Michael Innes 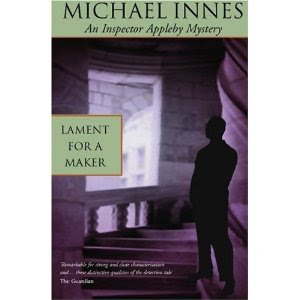 Michael Innes, a talented and prolific author of British mystery novels, crafts Lament for a Maker well by dividing it into seven sections from the viewpoints of five different characters (two characters have two sections) who, bit by bit, reveal a haunting, intriguing, and beguiling tale of truth and deceit.

This mystery involves an eccentric old lord-of-the-manor type generally called "Guthrie."  He is the last in a long line of Guthrie's, lesser lords who have reigned over the area around Kinkeig, Scotland since feudal times until today from their Castle Erchany.  The question surrounds the present Guthrie's sudden death from a fall from the magnificent, medieval tower at Erchany in the middle of a relentless snowstorm on Christmas eve.

In the first section, Innes masters, at least according to this American reviewer, a certain local Scottish dialect.  If there is a difficult part of the book to read, this would be it.  However, much like reading a foreign language, I gradually became used to the unfamiliar vocabulary.  Innes has many more teasing plot twists and delicious descriptions after the first narrator, so keep on reading.  I found the journey through the facts and fiction to the finale quite satisfying.  This was my first Inspector Appleby Mystery and I plan to read more.